I don’t want to talk about politics here because I want this to be a tech blog, so I’ll be quick. Let’s just say that, given the political situation in my country right now, I wanted to watch an specific interview between a famous journalist and the current leader of the Catalonian Independence movement. The only problem was that the site that hosts the video of the interview doesn’t allow its reproduction if some ad-blocking software is detected in the user’s browser. That’s extremely annoying since, if you disable it, you are not only exposed to the malware, viruses and COMMUNISM everyone knows are present in ads, but also they force you to watch like three 20~30 seconds long ads before even letting you start watching the video. I got so interested I decided to investigate how they detected the presence of ad-blockers and then check the robustness of the software in case it was insecure. Logical, right?

So, if you go to the site, you will probably get blocked because their ToS say it only works for Spanish users, but I didn’t try so I don’t know. Anyway, if you go to the site and you are Spanish, you get a nice and big “Play” button in the middle of the screen, and when you, innocent and naive creature, click said button, your hopes get crushed by the evil masterminds of the ad-block-blockers industry. You receive the following warning and you can’t access the video and all in life is wrong. 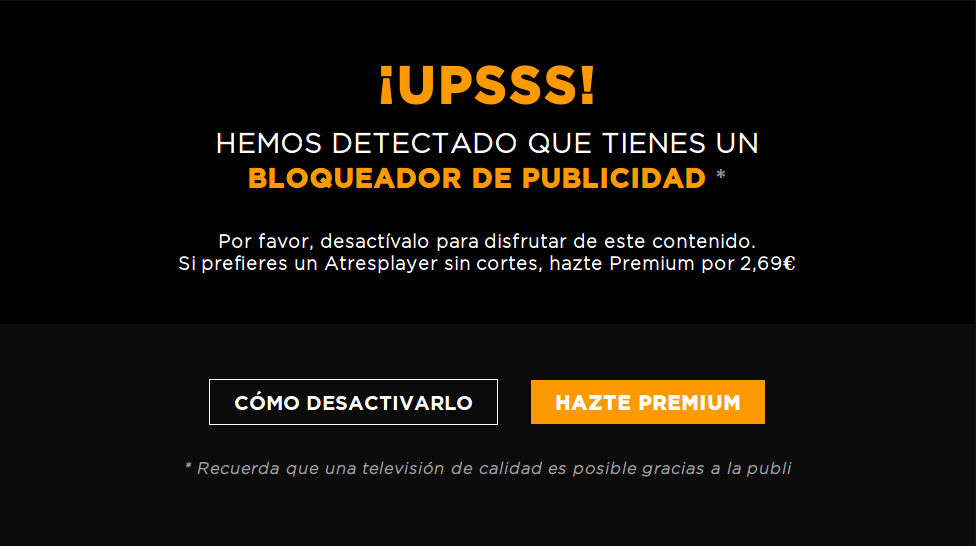 It basically says “Oops you’ll have to disable your ad-blocker or pay money to us if you want to see this”. Right, sure, I feel you. BUT. How do you know that I’m blocking your ads? ARE YOU BY CHANCE SPYING ON ME? Well, then that means two things:

That flawless logic gives me 100% legit pretext to “ethically”® “audit”™ your code in search of, hum, noncompliances, yeah, whatever that means.

The amazing land of obfuscated Javascript

So, with the almighty Firefox Developer Tools, we can search for the id of the warning that blocks the video reproduction. After 30 complete seconds, we find that said id, mensaje-adblock, is being used in a script called player.bundle.js, and oh man it’s FULL of obfuscated GARBAGE. There are references everywhere to open source tools like this one or this one, so I imagine a more sophisticated professional who was totally not like me would investigate said tools and try to understand what the obfuscated code is doing. But since I’m a total script-kiddie, I just furiously copy-paste all the code into a tool that better engineers than me offered to the world in a complete display of love for humanity. This is what I get:

Okay, I’ll stop pretending I understand any of that and focus on the single line that catches my otherwise shamefully short attention span.

Now, if we look for the variable a, we see it’s actually a function and contains the definition of a handful of other functions with original names like t, o and of course our little friend n. We are totally not in the mood to try to reverse-engineering all that because damn, have you seen how many lines of code are there?. Jesus, give me a break. So, let’s make a completely educated guess and say that a is the magic function that decides what happens when that evil and illegal videojs.plugin discovers we are running an ad-blocker. And it decides it won’t play the video, apparently.

It could be argued it’s worth a shot to try and call again videojs.plugin, but this time passing as second argument a function that does, like, absolutely nothing. Almost as if we were telling this guy: “do you see this good Samaritan over there? Yes, that one. If by any chance you detect he’s running any kind of ad-blocker, you can like totally chill, NO, seriously, just let him be. Are we good?”. The rocket-science, over-the-top code I engineered to accomplish that is the following. Are you ready? Take a deep breath because this is next-level programming:

And, guess what. It. Works. The video plays smoothly, 100% ad free, with our ad-blocker guy freely running up there, like God intended him to be. Now, of course, as a completely “ethical”℠ member of the infosec community, I totally stopped the video right there and reloaded the page in order to enjoy my minute-and-a-half of delicious ads because I’m a good guy and don’t want problems with law enforcement and I would never commit ~crimes~.

Oh, there’s one more thing. Since I actually never developed any kind of browser extension, I thought this was an excuse as good as any other to get started and write my own “Hello, world!” Firefox extension that automates the absolutely painful process of pressing F12 and copy-pasting that one line of code into the Javascript console so anyone can “ethically” verify this “noncompliance” that I “found”. Sorry I can’t stop using quotation marks, it’s a serious problem and I’m fighting it with all I’ve got but there’s still a long way until complete recovery. Anyway, here’s the code.

I decided to write this blog post because I spent a couple of hours playing with Javascript and didn’t want to leave it in a simple “wow, I almost by pure luck bypassed this trivial ad-block check”. So here’s this, in a shameful attempt at being more “fun” and less boring. I’m slightly worried that cops may come knocking to my door the second I upload this, because I may become responsible of the loss of MILLIONS in revenue if this gets popular and people start AVOIDING ads like the total criminals they are. So, LEGAL DISCLAIMER what is presented in this “article” is only for “demonstration” scientific learning responsibility-discharging-word purposes and I cannot control what others use my innocent line of code for.

On the other hand, I’m totally voting next Sunday in an ILLEGAL Independence Referendum organized in my region, so maybe I’ll end up in jail anyway. Wish me luck!